Monolith director Matt Vesely, writer Lucy Campbell and producer Bettina Hamilton (as part of South Australia’s FilmLab: New Voices initiative) have come together to create a brilliantly disturbing sci-fi thriller, transforming duress budget from disadvantage to narrative advantage. Using a single location and a single on-screen actor, Monolith deftly uses these limitations to heighten the tension, weaving a dark and claustrophobic narrative through a podcaster’s deep dive into the origins of a mysterious artifact.

A young journalist (Lily Sullivan) retreats to her parents’ secluded luxury home with her career in tatters after being fired from a respected newspaper for ethical misconduct. Still reeling from public disgrace, she begins working as a podcaster for “Beyond Believable,” a clickbait series that claims to dig into unsolved mysteries and uncover hidden truths.

Searching for a story, she is lost until she finds an anonymous email amid hate mail and interview requests, directing her to a retired housekeeper who claims a mysterious object has ruined his life. She contacts the woman, who tells her that 20 years ago she was given a black brick – an object that exerted a strange power over her, giving her visions and making her sick. The brick was stolen by her employers, who fired her, then sold the object to a German art dealer.

After just two phone calls, the young journalist is busy editing and manipulating the recordings in the first episode of her podcast. It’s an international hit, and soon she’s inundated with stories from around the world about other dark bricks and their grim impact.

Red with excitement, the reporter dives down a rabbit hole of research, uncovering a strange assemblage of dubious evidence – extraterrestrial linguistics, disease transmitted by a vector previously unknown to science, a government cover-up. With the trending podcast, the journalist is happy to fan the flames of conspiracy theory under the guise of revealing “the truth”. Then a package arrives at her doorstep and the mystery of the black brick becomes terrifying and personal. 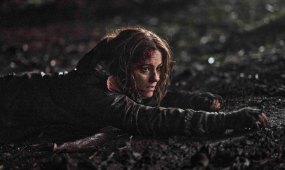 Sullivan is superb as an ethically questionable journalist, effortlessly holding the focus of the entire film as his character falls from disgrace to mania and madness.

Vesely’s feature is much more than clever manipulation of duress to heighten tension, and it doesn’t rely solely on the alien threat to generate its deliciously ominous atmosphere. While remaining firmly rooted in the science fiction genre, Monolith is basically a human story.

Beneath the throbbing claustrophobia lies a cunning perforation of privilege and a lucid critique of how we ultimately construct, manipulate and consume ‘truth’ in a globalized world.

Monolith is screened again at 6pm tonight (October 31) at Palace Nova Eastend as part of the 2022 Adelaide Film Festival.

Your support will help us continue the important work of InReview in publishing free professional journalism that celebrates, questions and amplifies the arts and culture in South Australia.