Coronado Island, a place that has long served as home to Hollywood’s finest since the golden age of cinema, continues to maintain and celebrate its chic charm and rich cinematic history even today. Coronado Island Film Festival (CIFF) is proud to be part of the magical filmmaking heritage of the island and is back for its 7th year with a five-day event November 9-13, 2022.

The festival, back as an all-in-person event, hosted a slate of immersive programming including studio and independent films, engaging panels, parties and of course the first event, the Leonard Maltin Industry Tribute Awards Gala. , hosted at the iconic Crown Room Hotel in Coronado, all of which brings together a wonderful celebration of the art and science of cinematic storytelling.

This year, two-time Academy Award® winner and on-screen icon Geena Davis will accept the Legacy Award, honoring her acting career and the establishment of the Geena Davis Institute of Gender in Media, whose documented research has affected significant changes within the entertainment industry. The Institute and Geena recently received the Governor’s Award at the 2022 Emmy Awards. A book promotion event at the Hotel del Coronado will feature her new memoir, die of politeness, and a conversation with Geena. This event is sponsored in association with Coronado Library and Warwick Bookstore.

Receiving the Humanitarian Award is director, screenwriter and producer Alexander Monteverde for his critically acclaimed films which have won numerous awards, including Bella, which won top prize at the 2006 Toronto International Film Festival by winning the “People’s Choice Award”. The Smithsonian Latino Center also honored Monteverde with its “Legacy Award” for his efforts on behalf of the Mexican-American community. His film SOUND OF FREEDOM, highlighting global efforts to end child trafficking, will be screened during the festival.

Opening night kicks off Thursday, November 10 with two screenings of Searchlight Pictures’ EMPIRE OF LIGHT by writer and director Sam Mendes. The film, which stars Olivia Colman, Micheal Ward, Tom Brooke, Toby Jones and Colin Firth, is a love story set in an English coastal cinema in the 1980s. Opening night festivities include screening and afterparty, sponsored by CalPrivate Bank.

Our red carpet films include the central feature, director and screenwriter Elegance Bratton’s INSPECTION, an A24 film that follows a young gay black man who has been rejected by his mother, with few options for his future, he decides to join the Marines, doing whatever it takes to succeed in a system that would put him next to ; as well as this year’s closing film, Universal Picture’s SHE SAYS. Carey Mulligan and Zoe Kazan portray New York Times journalists Megan Twohey and Jodi Kantor, whose investigation shattered one of the most important stories of a generation, shattering decades of silence around the subject of sexual assault in Hollywood and forever changing American culture.

The documentary ANXIOUS NATION, will be one of the festival’s social impact films in their ongoing effort to educate through film. San Diego Filmmaker and Famous New York Times Bestselling Author Laura Morton is co-director and creator, with editor and filmmaker Vanessa Roth. The film takes an in-depth look at America’s anxiety and mental health crisis, particularly its crippling impact on children and families. Laura will attend the festival and participate in a panel discussion alongside a professional skateboarder and one of the subjects of the film, Nora Vasconcellos, among others. In the film, Nora talks about the obstacles she overcame with a lifelong anxiety disorder and how her personal journey with mental health made her one of the most famous skateboarders in the world.

The festival will host a preview screening of director Alejandro Monteverde’s film, THE SOUND OF FREEDOM, the fictional story of real-life child trafficking activist Tim Ballard, a former agent who quit his job as a special agent with Homeland Security Investigations to rescue children from cartels and human traffickers. A post Q+A discussion with Tim Ballard will follow the screening.

Other notable independent films screened at the festival include: IFC Films’ FOUR SAMOUSSAa romantic comedy set in the Little India neighborhood of Los Angeles; DEAL WITH DAD from director Tom Huang who tells the story of a woman who reluctantly returns to her hometown to be with her brothers and deal with their father’s sudden depression; and RIVER from directors Jennifer Peedom and Joseph Nizeti, a breathtaking, musical odyssey that explores the intrinsic relationship between humans and rivers.

The festival presented the Masterlabs with great success last year and this year, DANTE’S HELLa Director’s MasterLab hosted by Joe Dante, will focus on his brand cinema. PARALLEL WORLDS: ART IN FILM SERIES will feature Danish director Andreas Koefoed, who will screen his critically acclaimed feature documentary in 2022, THE LAST LEONARDO. Renowned Australian digital artist and animator, Kathryn Smith, will present a unique presentation and exploration using 2D and 3D animation as a form of artistic expression with themes spanning consciousness. His creations include UNDEFINABLE MOODS (2001) and slip-ups/grace (2017), both of which will be screened.

Held during Veterans Day, it is traditional for the festival to honor veterans with the annual Tribute to veterans performance and musical showcase featuring the Coronado Band and special guests, Friday morning, November 11 at 11:00 am – this year’s theme is “The 11th Hour”. This event is free and open to the public, reservations are required and currently open on the festival website.

For more information and updates on this year’s lineup, please visit the festival website at www.coronadofilmfest.com

The All-Inclusive Emerald Badge is on sale now and is recommended as the best way to take advantage of all the festival offers. Advance bookings for badge holders open Saturday, October 8. Individual tickets for the Tribute to the Industry gala are on sale now. Tickets will open to the general public on Thursday, October 13. Ticket prices range from $15 to $275. 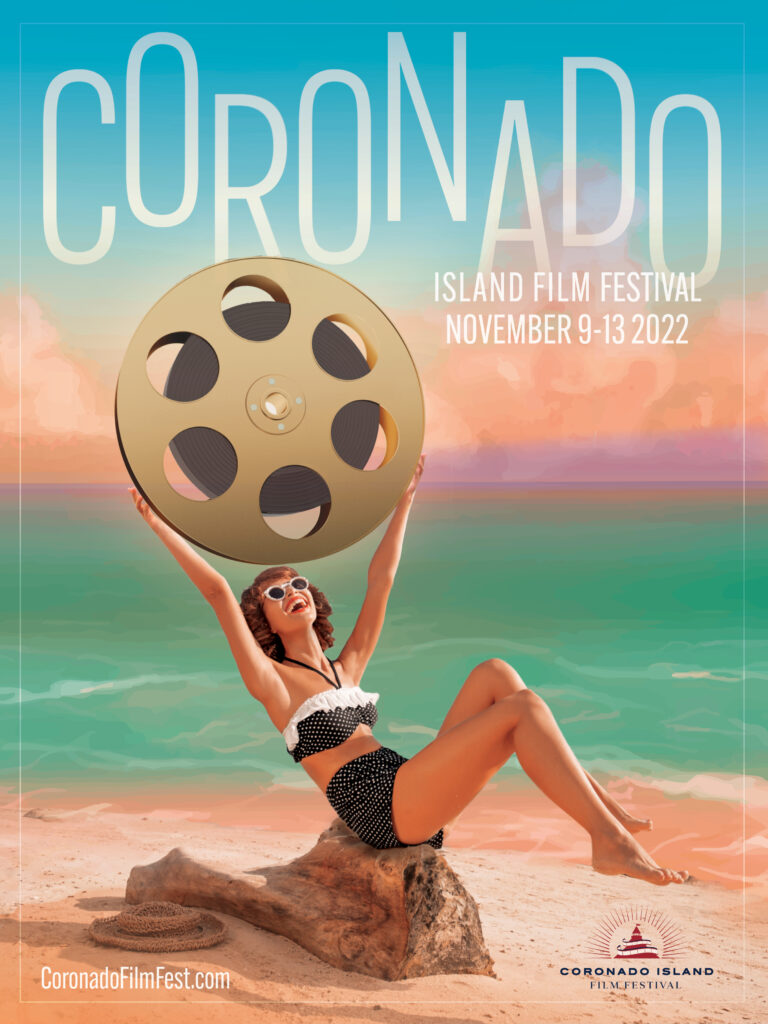