On a call with Madison Whitaker, the Girls Rock Austin program director travels around town delivering meals as part of the nonprofit organization’s spin-off program to tackle local food insecurity.

“We believe that if you are a camper or a family who wants to send your child to camp, we will do whatever it takes to get you there, regardless of your financial situation,” explains the musician / educator. “Do they need instruments? No problem. This is what this fundraiser is for, so that more kids can continue their music education, join bands, make friends and make cool art.

This Sunday at the Mohawk, from 2 p.m. to 10 p.m., the very first “Festive Fest” raises funds for the organization to continue the two efforts. The memorable lineup is led by acclaimed great Austin guitarist Jackie Venson, Houston’s Kam Franklin, venue-creating soul ensemble The Suffers, and provocative punk troupe Sailor Poon (with Whitaker on guitar). 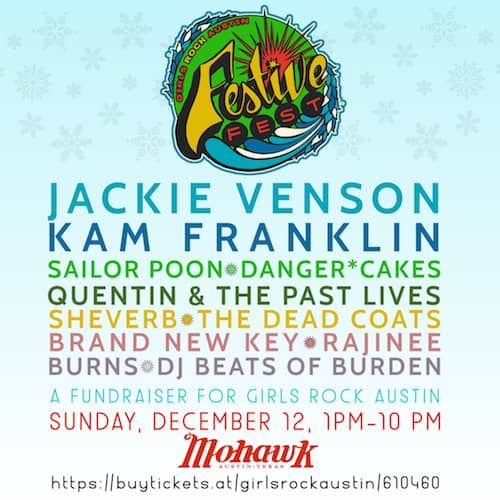 Tickets start at $ 30, with the online form allowing further donations to Girls Rock Austin. The event will also feature local craft vendors, a light show by Underground Light Orchestra and a raffle – with an overall goal of raising $ 20,000.

The funds support the Esme Barrera Unlimited Possibilities Fund, which offers full scholarships to campers who would otherwise not be able to afford it. During Girls Rock Austin programs, children ages 8 to 17 form groups and write original songs while being mentored by Austin women and LGBTQ musicians. They also uncover a number of other awesome topics, which Whitaker brings up:

“How to create loops, record their instruments and vocals, write lyrics and song structure. Once they finish the song, we have a music video workshop. We have integrated other [topics] such as stage presence, equipment recognition, mindfulness and self-care. We also have an anti-racism workshop, a black music history workshop, and a queer and trans music history workshop.

The group’s after-school programming and summer camps have gone digital in 2020, but they hope to return in person next year.

“We’ve had kids as young as eight recording their parts while switching between the Zoom room and the Google Doc where people write lyrics, and the Soundtrap – which is our collaborative digital audio workstation – in another. tab. They were kicking the buttocks, ”Whitaker recalls.

During the pandemic, Girls Rock also launched Operation Lunch Box in partnership with Keep Austin Together, an emergency food access network supported by Travis County, and the Cook’s Nook. The program accepts applications from volunteers and those in need at www.girlsrockaustin.org/operation-lunch-box. In October, the group passed the milestone of 100,000 ready meals delivered.

“At first there were only families of musicians, but once we had the winter disaster in February, we opened it up to anyone in the area,” says Whitaker. “Today it’s baked fish with broccoli and brown rice. Everything is really healthy and tasty because everyone deserves to eat.

Watch a music video from a recent group of Girls Rock Austin below: